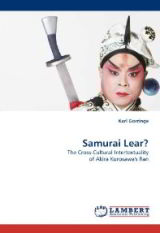 A new publication titled Samurai Lear?: The Cross-Cultural Intertextuality of Akira Kurosawa’s Ran by Karl Gorringe has been published by Lambert Academic Publishing last month. To the best of my knowledge, LAP is a type of a print-on-demand self publisher specialised on academic publications ranging from undergraduate theses to doctoral dissertations and other papers, and therefore enforces no editorial control of its own over its publications. In the case of Samurai Lear?, the text was apparently originally a master’s thesis at the English department of the University of Otago, New Zealand.

From the book’s description: “Most academic scholarship dealing with Akira Kurosawa’s Ran has concentrated in a rather Anglocentric fashion on the film’s status as an adaptation of Shakespeare’s King Lear. Mr Gorringe’s book takes issue with this approach by looking at the wider cultural and filmic context of Ran, in particular its status as a Japanese samurai film, in order to make a judgment about how much the film has actually been influenced by Shakespeare’s play.”

While alarm bells always ring in my head when I hear the words “academic”, “self-publishing” and “print on demand” in the same sentence (you may remember my Webster’s Timeline review), I think that sourcing and publishing theses and dissertations is actually quite a good idea, both as a business model and as a way for young academics to get their thoughts out there. No one, after all, is to the best of my knowledge forced to accept publishing deals, no one is forced to buy the published works, and no content is being stolen. And I have seen some surprisingly good and fresh research done by undergraduate students — work that will never gain any wider audience than the university library. Having said that, previews of the works published would of course be nice, especially since Amazon provides that functionality.

Just saw this post. I’ll go and see if I can get a copy of the Thesis from the University of Otago Library in Dunedin where I live.

I forgot that you live there, Master Thief! Let us know what you think, if you get a copy!

The publisher was actually kind enough to send me an electronic copy. Unfortunately, work demands and a nasty case of the flu have prevented me from opening the file so far.

Edit: I originally mistyped your handle as “Master Chief”. Too much Halo for me?