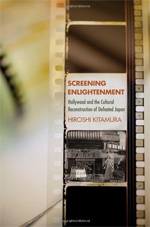 Published in May this year, Hiroshi Kitamura’s Screening Enlightenment: Hollywood and the Cultural Reconstruction of Defeated Japan looks at the way American film industry operated during the six-year U.S. Occupation of Japan following the Second World War.

Screening Enlightenment describes how Hollywood films were used to promote American ideals to Japanese audiences, and how American studios turned a war-torn Japan into one of its key international markets. Kitamura’s book is an extremely well written and thoroughly researched book drawing on a wide range of sources – the 263 page book includes 42 pages of references – and should be of interest not only to those fascinated about Hollywood, but also to those interested in the reconstruction of defeated Japan, or in the country’s post-war cinematic culture.

After a brief Preface discussing the aims of the book, Chapter 1 (21 pages) begins with a background describing Hollywood’s activities in Japan leading up to the Second World War. Chapter 2 (20 pages) discusses Hollywood during the war, as well as the re-introduction of American films into Japan following Japan’s surrender. It also includes an excellent overview of the American Occupation’s censorship rules, regulations and processes.

Chapter 3 (20 pages) takes a closer look at Occupation censorship in the light of how it affected Japanese cinema. One of the three case examples given here by Kitamura is Kurosawa’s Drunken Angel, and the censorship processes behind the making of the film are well described. Chapter 4 (25 pages) turns to look at Hollywood’s own fragile relationship with the Occupation censors, illustrating how also American films underwent censorship in order to fit the Occupation’s larger political mission of rebuilding Japan as a peaceful and democratic nation. It also begins to illustrate the remarkable degree of collaboration between various American studios operating in Japan, something that the following chapters will further describe.

Chapter 5 (25 pages) concentrates on Hollywood’s marketing strategies in Japan. According to the book, these very much concentrated on the message that American films were a superior manifestation of culture, with strong educational as well as entertainment qualities – something that the book’s own title Screening Enlightenment is a reference to. Chapter 6 (22 pages) moves the discussion from marketing into distribution, and describes the ways and terms in which Hollywood films were exhibited in post-war Japan, offering a fascinating glimpse into the workings of Japanese theatres of the time.

Chapter 7 (21 pages) discusses the critical reception of Hollywood films in Occupation Japan, and the cultural elite that shaped the ways in which those films were viewed in the country at the time. In Chapter 8 (22 pages), Kitamura continues this line of thought by presenting the activities of Eiga no tomo, a Japanese film magazine that concentrated on American films and had a very dedicated and active fan base. The book is then ended by a Conclusion (7 pages), which appropriately enough sums up the discussion. Following the Conclusion are an appendix, notes and references, a bibliography, acknowledgements and an index.

I found Kitamura’s Screening Enlightenment a great read. It balances historical details, academic research and its topic’s larger context very well, and presents the information in a well thought-out order and manner. Almost every chapter has well selected and interesting case examples, which successfully take the discussion from the general into the specific without getting lost in the details. The discussion is easy to follow, never repetitive, and for a book less than two hundred pages long, it is jam-packed with information.

There is in fact very little negative that I have to say about the book. Obviously, for a book of its size, it can only cover a certain amount of ground, and so there certainly is more to be said about the subject than the book includes. But then, the book would have had to go into more case-specific details. Screening Enlightenment accomplishes what it sets out to do, and does so magnificently.

One could think of last year’s Censorship of Japanese Films During the U.S. Occupation of Japan by Lars-Martin Sorensen as something of a companion piece to Screening Enlightenment. The two works approach the topic of post-war censorship from the opposite ends, but share much common ground. While Sorensen’s book is more detailed than Kitamura’s, I feel that Kitamura’s analysis is generally better laid out and more skilfully written, and as a result one gets slightly more out of it when it comes to the topics shared by the two books. Of course, ultimately the two focus on fairly different aspects of Occupation censorship, and therefore one book cannot in any way be said to replace the other.

Screening Enlightenment is an excellently written book that is a true pleasure to read. If your focus in strictly in Kurosawa, it is not for you, but if you have any interest in the cinematic culture around him during the post-war era, Kitamura’s work is a valuable source of information. Similarly, if you count Hollywood, post-war Japan or Japanese history among your topics of interest, it is very much worth getting holding of. The book may not exhaust the topic that it discusses, but it is far more than simply a competent starting point for someone who is a newcomer to the subject, and with its huge list of reference resources, it could also well be your first stop if doing research in the field.