Google celebrates Kurosawa with a doodle

According to various news sources, Google has apparently decided to celebrate Kurosawa’s 100th (March 23) with one of its legendary doodles, which replace the company’s logo on its search front page. I cannot see the picture myself, so I assume that it is only shown in certain regions of the world, but here it is: 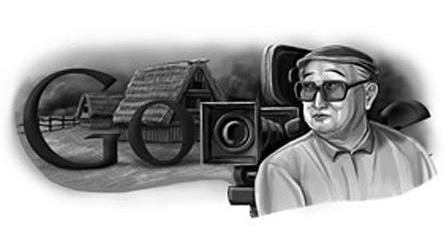 While it’s great to see one of the world’s largest companies acknowledge Kurosawa (and in doing so drive quite a bit of traffic to this website, by the way), I personally think that they could have done a better job with the picture. This one makes me think of Chairman Mao, who is about to be murdered by a stalking camera (you can see the axe blade on the right).

But what do you think about the picture? And what are you planning to do to celebrate Kurosawa’s one hundreth?

It would also be interesting to hear if you actually see the Kurosawa doodle when you go to the website’s front page. Also, if you click the image, it should take you to search results for “Akira Kurosawa” — where on that list is this website for you? (It varies slightly depending on where in the world you are.)

Finally, in case you are interested in more Google doodles, you find them on Google’s logo page.

Interestingly enough, because iGoogle is set as my home page, that’s what I see instead of Google’s front page when I click that link.

You’re right, the drawing looks like a cross between the older Kurosawa and Chairman Mao, though I always noticed some resemblance. I think the shape of his face is wrong, but Coco will probably have more insightful comments to make.

Nevertheless, I’m impressed by what Google is doing. Now I have to post a Kurosawa tribute to my LiveJournal. If I’m not feeling too lazy, I may post a link here too. I’ll also have to see where this website appears on the Google list of search results.

But not the main Google. Darn it. I read the first line of your post and went to look, all excited ‘cuz I wanted to gloat over all my friends who think Kurosawa is boring…show them just how important he is by getting the main Google treatment.

lawless, do your post on LiveJournal, please, and post a link here. We are counting on you to get the word out. I posted it as my status on Facebook. ❗

We’re not cool enough to have the doodle as the day’s logo in the U.S….it is here, in the U.K., though:
http://www.google.co.uk/

Indeed, seems like google.com doesn’t have the doodle, while some selected Google sites do:

And probably a few others. Why only some countries and not others, I haven’t got any idea!

And yes, we are now all eagerly waiting for your Kurosawa write-up, lawless! 🙂

There is a nice article on the centenary in todays Guardian

I must admit I can’t do anything to celebrate today! I don’t get home until late so I can’t even watch one of his films. Maybe I’ll pick up some saki on the way home and have a tipple in his honour.

I wonder why America’s Goggle doesn’t get anything.

The drawing is rather bad, Kurosawa looks so pudgy, and I don’t think his expression could look anymore feminine and uncertain. The camera by the way isn’t historically accurate for Seven Samurai. 😛

The link to my LiveJournal post is here. Enjoy! 🙂

A word of caution, if you decide to look around at my public posts: they include my fanfiction, much of which is slashy or BL/yaoi in nature – basically, everything other than Buffy/Angel drabbles and one short piece of original fiction. That means male/male romantic relationships and/or sex, depending on rating. Proceed at your own risk. You might want to look at the fic charts, which list fandoms, characters, length of story, and ratings, first. 😯

I forgot to include my Google search results in the above post. This website came up ninth, but would have been higher up in the results had it not been Kurosawa’s centenary, since one link was to the Guardian‘s list of ten essentail Kurosawa movies and another was to a Telegraph article on Kurosawa and his centennial.

Sorry to keep spamming the site: Here’s a link to a Mirror post about what other directors have said about Kurosawa. I thought Sidney Lumet’s comment was one of the most interesting: “Kurosawa never affected me directly in terms of my own movie-making because I never would have presumed that I was capable of that perception and that vision.”

Thanks for the links, guys! An interesting selection the Guardian has there for “essential” Kurosawa films. I would probably take off The Idiot and The Hidden Fortress, and replace them with High and Low and Red Beard. But that’s probably just me.

Mirror.co.uk’s list of directors’ quotes is fun reading. I wonder what the eight Kurosawa masterpieces are according to Coppola.

I’ve got the day off, so I’m leaving the day-long Turner Classic Movies marathon on in the background. Thankfully, I got up just early enough to catch SANSHIRO SUGATA 2, the only Kurosawa film I had yet to see.

Vili, I agree with you about that ten essentials list. While I was glad to see Drunken Angel on the list – I like it a smidge better than Stray Dog, which also deserves to be on the list – based on reputation, I’d take off The Idiot (which I haven’t seen) and The Hidden Fortress, which imo is only on the list because of its influence on Star Wars.

Of the other Kurosawa films I’ve seen, I’d probably add The Lower Depths (which I know isn’t everyone’s cup of tea, but neither is The Hidden Fortress mine) and possibly Sanjuro, but based on reputation, HIgh and Low and Red Beard are good choices.

Despite my dislike of it, I agree that Rashomon belongs on the list, if only for its starting that entire genre, or way, of making movies, or of looking at a story.

Thanks for the feedback on the LJ post, Vili and NoelCT.

My guesses as to the eight movies Coppola might be referring to:

(I realize that’s more than eight. My guess as to the last three would be Throne of Blood, High and Low, and Red Beard.)

Me again. I heard from a LiveJournal friend from Russia that the Kurosawa doodle appears on the Google Russia site as well, which I guess makes sense considering that Derzu Ursala was a Russian co-production. So you can add that to your list as well if you like, Vili.

Also, she had several people ask her who that Japanese guy was, I guess because she’s into several anime and manga fandoms.

BTW, Vili, thanks for the LJ comment and the Mifune Seven Samurai screencap; I edited my LiveJournal post and added it.

That’s a nice way to spend the day, NoelCT! Once, back years and years ago, Canal+ did something similar, and that was the day when I saw many of Kurosawa’s films for the first time. Maybe today’s TCM run will inspire others like Canal+’s inspired me.

As for the local TCM here, no Kurosawa in their schedule. Today’s films apparently include Batman (1989), Cannery Row (1982), The Big Circus (1959) and Bombers B-52 (1957). Actually, I haven’t seen Batman for a long time… Then again, I think I could just pop in the Prince soundtrack, which I love (even if it’s not exactly a typical fan favourite).

Lawless, The Lower Depths would probably be my “and one for luck” pick as the 11th film. Unless I would shamelessly pick my favourite Kurosawa film, One Wonderful Sunday, which isn’t really all that essential or special, I just happen to love it.

Actually, I just watched Murnau’s 1927 classic Sunrise: A Song of Two Humans the other day, and it reminded me quite a bit of One Wonderful Sunday. Except that Sunrise has a drunk piglet in it. Every film should have at least one drunk piglet!

I still prefer One Wonderful Sunday though, piglet or not.

But I’m just babbling now. Thanks for the heads-up about Google.ru, lawless! I actually started to go through all the international Google domains from the list at the bottom of this page, but lost patience somewhere between Dijbouti and Ecuador. I still don’t get it why some countries get Kurosawa and others don’t. For instance, Sweden and Denmark have it, but Finland and Norway don’t!

TCM just finished playing ONE WONDERFUL SUNDAY. I love it just as much as you, Vili. Not as polished as his later stuff, but there’s something so magical about it.

More articles and blogs about Kurosawa:

From MTV.com, an article about movies influenced by his and remakes.

Another mirror.co.uk blog post about him, this time listing ten things you should know about him.