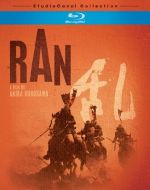 A week or so ago Lionsgate released Kurosawa’s Ran in blu-ray as part of their StudioCanal line, so I thought that it is time to look at the reviews. They don’t paint too positive a picture, I’m afraid.

DVD Talk point out “a wealth of issues that mar this gorgeous film”. You should read the review for the details, but to sum it up contrast is apparently way off, with too much edge enhancements, with many scenes “blown out of proportion” and with lots of “detail-swallowing darkness and overly bright points”. The reviewer also notes “a rather abundant level of digital grain that stretches beyond the confines of natural film texture”. Oh dear. At least the sound quality and the extras get thumbs up.

The DVD Verdict review pretty much agrees with DVD Talk and points out the larger problem with the release: “no matter how many times you look at it, hold it in your hands, put it on your DVD shelf, rearrange its position or squint at it from a distance, it stubbornly and obstinately refuses to transform itself into a Criterion Collection title”. Considering that this release apparently caused the cancellation of the Criterion release last year, the end result is quite disappointing indeed. Just like the DVD Talk review, also DVD Verdict really only recommends the release for fans who are after the new extras (just don’t throw out your old Criterion DVD).

It should be noted though that all reviewers agree that the colours are generally pretty good with this release, and that considering everything this may still be (digitally speaking) the best release out there. Just not quite what the film would deserve.

See Kurosawa Blu-rays for more information about the availability.