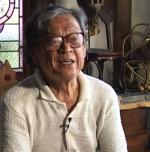 Those familiar with the Akira Kurosawa: It Is Wonderful to Create series, episodes of which most of Criterion’s Kurosawa releases include, will remember Muraki as the man often dressed in a sweater and scarf (except for the screenshot above, which is from the Seven Samurai extras), and who often had all the most interesting anecdotes and memories to share, illustrating them with grand hand gestures.

The four-time Academy Award nominated Muraki in fact worked on altogether 19 of Kurosawa’s 30 films. He also collaborated with Kurosawa on the director’s failed Tora! Tora! Tora! attempt, as well as on the 1999 Kurosawa homage After the Rain. Muraki and Kurosawa also shared a credit on the Toshiro Mifune directed and Kurosawa edited Legacy of the Five Hundred Thousand.

Not only did he do great work, but I agree that he was quite the storyteller durring It Is Wonderful To Create. He will be missed.

Aw, this is sad news, and a real loss! He gave Kurosawa’s films their look! In fact, as we discuss The Lower Depths I think about his set design and his filmed stories about the set- he made the “making” of the film so much more real to me through these interviews. I am saddened by his passing.
Thank you for this news, sad as I am to receive it.

RIP. It was a real treat watching him on the It Is Wonderful To Create documentary.

Was looking in the news archives and saw nothing of Mike Inoue passing away last year. This surprised me as he was Akira Kurosawa’s nephew, Mr. Inoue grew up in the same house with Akira as Akira lived with his older sister for years painting in his bedroom and reading Russian books. He later served as his assistant and International Liaison working as a interpreter and translator for Kurosawa between discussions with Richard Gere, Scorcese, Lucas, and all the others. Mr Yoshio “Mike Inoue” passed away in August, 2008 after serving Kurosawa Production as a board member for decades and after a long career on the set and in the writer’s workshop with Kurosawa. Without Mr. Inoue and his elegant ways many say Kurosawa would have never been able to effectively build relationships with many Hollywood directors. Tony

Sorry, Yoshio “Mike” Inoue passed away in August 2008 after having complications that came about several months after having a debilitating stroke. All that new him describe him as a true gentlemen and he is survived by his second wife Yoshiko. His first wife passed away from cancer I believe some 30 years age. I believe he was approximately 80 and a heavy smoker till the stroke.
Tony

Thanks, Tony. If I’m not mistaken, Inoue also wrote the original draft of The Bad Sleep Well, which Kurosawa took from him and, in his usual style, completely reworked with his co-writers.

my pleasure, yes the bad sleep well! that was indeed influenced by Mr. Inoue

I’m still sad about Mr. Muraki…his recollections on the dvd extras of “The Lower Depths” are wonderful…
And, although I “know” Mr. Inoue less well-am also saddened by his passing. I was very nearly frantic to get to NYC to see Teruyo Nogami when she spoke, along with Tatsuya Nakadai last year at the Film Forum.

I feel that all of the important players are leaving the stage, and soon we will only have dusty words, not the living presence of those who knew Kurosawa, or worked closely with him. Each loss is a painful one.

yes, i agree it is so sad to see these people passing on. fortunately, they have all left video interviews behind for us to enjoy. i think you can still see some of the footage on the anaheim university website http://www.anaheim.edu on last years cherry blossom gala event page. you can get there by going through the green globe film award page on the anaheim site and then click on last years event on bottom right or cherry blossom gala on left. I heard a kurosawa film will be shown again this year at a warm up to the green globe film awards where anaheim will launch the kurosawa online film programs. there is talk that at the screening of the Kurosawa film and at the green globe film award dinner gala anaheim university’s akira kurosawa school of film will be giving a sneak peek into some of the anaheim university kurosawa archives the school holds which includes hours and hours of kurosawa on the set making his films and interviews with Ms. Nogami and Mr. Inoue being interviewed together with Mr. Inoue speaking in English and interpreting for Ms. Nogami and the interviewer from the university.
FILM IS SO COOL! Tony
😛

Thanks for the info, Tony!

FILM IS SO COOL! Tony

Film isn’t so cool when it falls out the camera, rolls over to a portable electric heater, catches on fire, and you inhale the fumes. 😛 Hard-drive and solid state are way cooler. 😉