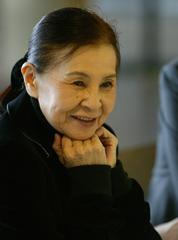 China Daily has published an interview with Emi Wada, where the renowned costume designer discusses her work, including anecdotes from her Oscar winning work for Kurosawa’s Ran.

Wada worked on two Kurosawa films, Ran and Dreams, and has since created costumes for numerous big name films, including Peter Greenaway’s Propsero’s Books, The Pillow Book and 8 1/2 Women, as well as Nagisa Oshima’s final Gohatto, and the Hong Kong films Hero and House of Flying Daggers.