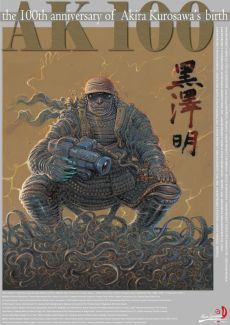 The AK100 project now seems to have an international website called AK100 World Tour. I must say that I am not fully certain how I personally feel about it. In fact, some of it looks like a very bad joke. Which it might be. But probably isn’t.

In any case, the website confirms that there is a travelling exhibition that will tour the world and will include film screenings, an exhibition of Kurosawa’s belongings and memorabilia, a photo exhibition and potential other events such a lectures and concerts. The “tour” will begin in Paris in March next year, and will finish in Tokyo, Osaka and Kyoto at the end of 2010. Other cities tentatively announced on the website are Rome, Salzburg, Madrid, Warsaw, Munich, London, New York, Brasilia, Buenos Aires, Beijing, Shanghai, Seoul, Taipei, Hong Kong and Dubai. Other cities in Europe and East Asia are apparently still being considered.

Now, the official visual designer of the events is no one else but Jean Giraud, better known as Moebius. While I personally find Giraud’s work very interesting, I am not sure if he is the right person for a project like AK100. To realise that you only need to look at the official AK100 World Tour poster, displayed above. A war-like Akira Kurosawa holding what looks like a semi-automated hand-held camera-weapon, while sitting on top of a pile of tentacles (!!) just seems to have absolutely nothing to do with the Kurosawa whose films I have been watching.

And then there is the official theme song (what is this, anyway — a rock tour?). I really don’t know how to describe my response to the song chosen, so just take a listen yourself: Hide – Misery.

Something that also worries me is the mention that the screenings of Kurosawa’s movies will be “visually enhanced and re-released”. Considering that Giraud and Hide were chosen to be the artistic face of the tour, will we now be getting CGI space monkeys and heavy metal soundtracks on Kurosawa’s movies?

To me, the people in charge of the project seem to be making all the wrong choices. They also seem not to be ready to pay for someone who actually writes proper English. While I am not one to criticise any individual for language mistakes — not least because English is not my native tongue, either — I think it shows something about the project and the people behind it if even the promotional material hasn’t been considered important enough to go through a native speaker.

The only symbolism of tentacles I’m aware in Japan, is of the abusive sexual nature. Perhaps Kurosawa is trying to fight them off with his “gun” to prevent getting raped by the money hungry, dis-honoring committee behind AK100 project, which is headed by no other then Hisao Kurosawa.

Hey, guys, this is just a bunch of goofball stuff. It probably doesn’t matter.

I probably would have preferred Nakadai, Nogumi, Murakami and anybody else left from the day to be hosted and lavishly feted and respected in connection with a traveling retrospective. Something like the Nakadai retrospective in NYC this summer. (I am still kicking myself for not going).

Maybe they could do Tokyo, Shanghai, Paris, and NYC or something. Not too many cities-our friends are getting older! That would have been nice.

I dont know, Coco. Seems they are using Kurosawa as a gimmick.

The Japanese in the past, have been quick to sell out their culture, not giving it the respect the rest of the world gives it. With Kurosawa, they seem to be selling him out, it’s all like a bad Steam-Punk Japanese comic–which wont surprise me they make one, using Kurosawa.

I find rather disturbing.

Jeremy, I get how you feel, and I admire and respect your stand on this. This whole circus reminds me of stuff that always swirls around popular culture, and the fact that money is more important than integrity in some circles. (Hello USA banking crisis).

The really good news is that this cannot diminish the actual body of work of Kurosawa that is now available to a wide audience.

Could it affect adversely his reputation? Yes, there’s a chance it could. I may not see all the possible ways things can go wrong, but it seems that this stuff would, more likely, get Kurosawa’s name back in circulation, and that this could not be a bad thing- because the possibility is that more people would hear about this guy and check out his films.

I know a guy who used to play a video game based on the Romance of the Three Kingdoms-and it made him interested enough to travel to China and see the country, meet the people. I spent a rainy day hunting down an English-Chinese version of the books (a HUGE set!) in Shanghai with him.

And, I would dare say that a good 70% of students taking Japanese language at our university are led to an interest in the culture by manga and anime. For real. And I used to cringe, ‘cuz they would never know, if I asked them, about Japanese cinema. They never heard of Mizoguchi or Kobayashi. But, that’s very silly of me. After all, looking at ASCAP records of the 1930’s I probably couldn’t recognize from the titles any of the songs. Times change, tastes change, people grow and learn. It may seem astonishing to us that Kurosawa’s own family would be involved in some ridiculous marketing and bad pop reboot of Kurosawa’s ouvre-setting gemstones in crap. But, I don’t think it will matter much to Kurosawa’s actual work.

As I said, it would have been nice to have a traveling retrospective of the films with old friends like Nakadai and Nogami speaking at special venues in major metropolitan markets. Hey, and ideally, Toho would sponsor, right? They have that 7-samurai mural gracing the entrance of their studios, you would think they would have considered this.

Very true, coco. Your vision cast out, much further then mine.

Nah, you are very generous Jeremy. I want you to know that I totally get where you are coming from. It feels like seeing someone you respect and admire being publicly humiliated.

I wonder, was the gun-camera in the AK100 poster actually inspired by the AK-100 series of Kalashnikov rifles? Just a thought…

Very long time no see. I wonder whatever happened to the AK100 world tour. Nothing here in London, as far as I know. A friend of mine sent me parts of a documentary they made in Japan with interviews to Scorsese, Gear, etc.. and that’s all I know about it…
The link above is now broken and I really wonder WTF!

Twonder whatever happened to the AK100 world tour.